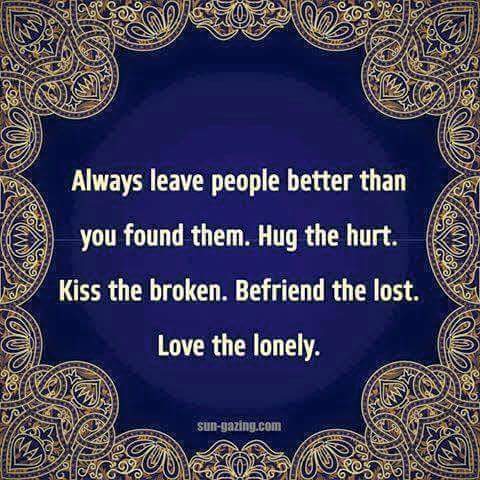 This post was inspired while having lunch with my lady, my friend Gail and her son. Gail was mentioning how people routinely come up to her and mention certain things she has done that have really touched them. If you were to ever meet Gail you would find this easy to believe as she has a very good energy and spirit about her. The funny thing is the same thing happens to my lovely Margie and myself quite often. Just last night a gentleman thanked Margie for making him get out and be social. People often remember me as the “Friendly guy from the post office”. Sometimes things end up a little more intense. Considering the kind of work I am involved in there are occasions when tools I have passed on, or just different ways to look at the world have inspired people and helped them take the actions necessary to turn their lives around.

It always reminds me of the importance of being kind. You never know when what you say, be it a kind word or an inspiring idea that can have a great impact on their lives. You never know if someone may be going through a challenge we know nothing about. What you say may inspire them to follow their dreams and become a blessing to so many others. Imagine what the world would be like if Einstein never pursued his passion? Being Jewish in the World War two era he could have easily just become bitter and walked away. You have heard me mention Walt Disney who was rejected by over 300 bankers before being approved for a loan for Disneyland. In addition to strong personal power I believe these people must have had a person or two who inspired them along the way. Einstein himself said that he used to say “thank you” over 100 times a day.

So what about the second half of the title of this post? The reason why you should watch what you say especially in times of great emotional upset is this, you never know who is listening. You could shatter someone’s dream and they may give up and never go on to bring their gifts to the world. We may lost the next Walt Disney, or the next great doctor, scientist or author. Your seemingly foolish comment may give someone a complex for the rest of their lives, or worse push them over the edge in a battle they have been fighting.

So the point is this, use kind words and encouragement often, and do your best to swallow your criticism and angry words. If you wish to encourage more people feel free to like/share and comment on this post. Together we can turn the world into a better place for all.