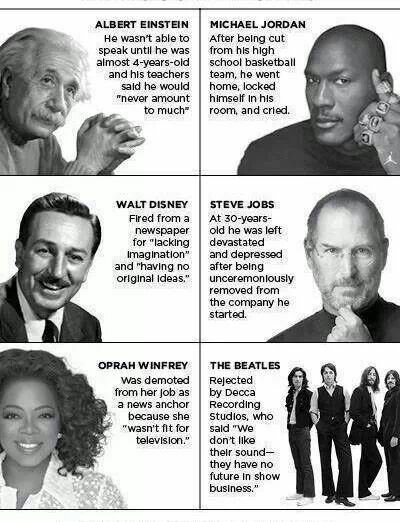 Take a look at the people featured here. Do you know what they all have in common? The all excelled in a field that they were specifically told they were a failure in. Not ok, not average, but terrible. Can you imagine television without Oprah Winfrey? How about the music history without The Beatles? Einstein not only became a great scientist, but changed the entire way we view the world. Walt Disney not only did have an imagination, but filled the imaginations of countless children when he was alive and his companies continue to do so to this day. You may be saying “Neil that is all well and good for these people, but what does that have to do with my life?” The simple answer is everything! How many times have you been told you were no good at something? How many times have you tried something a couple of times or maybe even once and failed miserably at it? I know I have countless times. What do you do? Do you stick with it? Perhaps you just say to yourself “Well that was nice, but I guess it’s just not for me” or do you believe the words of the so-called “experts” when they tell you that you will not succeed? Sometimes these sources can be well-meaning friends and family members speaking out of their own fears. I have a hard time imagining myself pursuing a career in professional sports if I was cut from high school team like Michael Jordan was, but he did and went on to become one of the greatest of all times. How many dreams have we given up on because we have been told that our dreams are too unrealistic? Or that we lack the certain talent needed to achieve success in that field? How many times have we tried something and failed at it only to move on to something else. Take another look at the list above and imagine how the world would be different if these people had given up on their dreams? That is of course unless you are like poor Mr. Disney and completely lack any imagination.